Concrete is everywhere and is seemingly used for everything one can think of. It is shocking that something used for sidewalks and driveways is also used to uphold some of the biggest structures in the world. Looking at this perplexity, you may be wondering how much concrete weighs.

A solid slab of concrete weighs 4,050 pounds (2 tons) per cubic yard on average or 150 pounds per cubic foot. The actual weight of concrete depends completely on the density, the amount of water used in the mix, and the components used to make the concrete.

These things and more add to the weight of any given concrete structure. Read on to find 15 specific examples outlining the diversity in the weight of different types, structures, and styles of concrete.

Factors In The Weight Of Concrete

Concrete is a material that is made up of many components, all of which contribute to the overall weight of concrete structures.

Unlike other earthen building materials like granite, marble, or stone, concrete is not cut out of a quarry or the side of a mountain- it is created using a mix of Portland cement, broken rocks, gravel, other aggregates, and water.

The complex, man-made design of concrete means it can be a range of weights.

These factors and more will greatly change how much your concrete weighs.

To get an estimate of how much concrete can weigh, let’s look at how much each component weighs per gallon.

The weight of these components is pretty streamlined, with 12.06 pounds per gallon being the standard weight.

This is not an estimate of how much concrete as a whole weighs because you do not add an equal amount of each material.

If we were to estimate the weight of concrete components for a cubic yard of concrete, it would probably look more like this:

Altogether, this mix of concrete would weigh 8,072.65 pounds, unset.

Related Article: How Many Bags of Concrete Equal a Yard?

Once concrete sets, it does not change how much it weighs dramatically, as most of the weight comes from aggregates and cement, not water.

How Concrete Is Weighed

Now that you know how much concrete weighs, you may be wondering how it is weighed once dry.

The weight of concrete is calculated using the length, width, and height of your structure. This is done using estimates as well as exacts when it comes to aggregates, water, and cement.

Weighing concrete may seem pointless, but it is a smart and useful thing to do.

The main reason concrete is weighed is that the weight of it determines the density, longevity, and strength. Denser concrete will have a higher PSI (Pounds of Pressure per Square Inch), meaning it will be able to handle more traffic, weight, and use.

Commercially, the PSI of concrete matters a lot, because concrete buildings, roads, and bridges have to be strong enough to handle the amount of use and weight they will be experiencing.

15 Specific Examples Of How Much Concrete Weigh

We thought it would be interesting to know just how much everyday concrete objects and structures weigh, so we made a list of 15 specific weights of 15 different concrete items.

Driveways are everywhere, so it’s no wonder that we would bring it up here.

In the United States, a typical concrete driveway has the dimensions of 40 ft x 16 ft x 5 inches– a volume of 9.88 cubic yards.

Related Article: The Real Cost of Installing a Concrete Driveway

Concrete benches are an extremely common feature in parks, gardens, and landscaping projects.

Though they may look sweet and delicate, the average park bench weighs 600 lbs.

A little known fact about the Romans is that they invented concrete. It was the newest and most advanced building technology of the day, and they put it to good use.

This being mentioned, the Roman Colosseum is made of concrete and weighs an estimated 24 tons (48,000 pounds).

This may seem inaccurate, but the frame of the colosseum is predominantly wood with some brick, so the weight is not calculated for solid concrete.

The Christ The Redeemer Statue in Rio De Janeiro, Brazil, is a sight to behold.

Without the 26 foot tall pedestal, Christ The Redeemer is 98 feet tall, with arms that stretch 92 feet wide.

The Hoover Dam is an amazing and functional engineering feat, being an arched gravity dam supporting a lake.

This dam has no flying buttresses, meaning it is entirely held up by the curvature of the structure and the pressure that Lake Mead puts on it.

According to the United States Bureau of Reclamation (USBR), the Hoover Dam weighs more than 6,600,600 tons.

This massive hydropower dam is located on the Yangtse River in China.

The Petronas Twin Towers are two beautiful buildings that were once the tallest in the world.

Much of this large weight can be attributed to their 120-foot deep concrete foundations.

This tower is the tallest building in the world, reaching a height of 2,722 feet at the tip.

Though you may have never heard of it, the King Fahd Causeway is a monumental roadway that connects Saudi Arabia and Bahrain.

This hotel is part of the largest 5-diamond hotel and resort complex in the world, so its massive size is not its only feat.

This dam, located in Hérémence, Switzerland, is the tallest concrete dam in the world, stretching 935 feet high and 2,280 feet wide.

The Wilshire Grand is a hotel located in Los Angeles, California, USA, and is the tallest building West of the Mississippi.

The Pantheon, located in Rome, Italy, is one of the world’s most famous structures.

The United States Pentagon is a notoriously secretive place- few are allowed in and even less speak of the workings within.

This building is the headquarters of the United States Department of Defense, so they made sure to protect it by adding extra thick concrete walls around the entire structure.

The last structure we’ll be looking at is the Grand Coulee Dam, located on the Columbia River, just west of Spokane, Washington, is the largest dam in the United States. 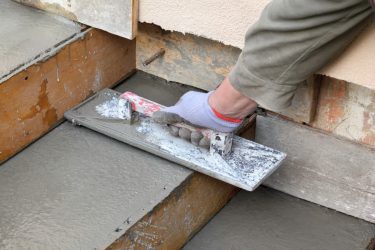